The Dick’s Nationals is set for March 31 – April 2 in New York City. Six of the top 10 teams in the FAB 50 National Team Rankings powered by Ballislife.com will participate. Grassroots Hoops presents the event’s record book through its first eight years. Coaches and this year’s participants have something to shoot for and fans can get a glimpse of what teams have played well and  stood out so far.

We go 20 deep from five separate regions of the nation in our final Grassroots Hoops Regional Rankings. We rank 100 teams and nobody across the country ranks as many teams as GrassrootsHoops.net. Final No. 1 teams are Oak Hill Academy (East), Montverde Academy (Southeast), Lincolnshire Stevenson (Midwest), Mustang (Southwest) and Oakland Bishop O’Dowd (West).

There are 10 new teams in this special MLK edition of the GrassrootsHoops.net FAB 50, which includes results through Monday’s games. Montverde Academy of Florida is still No. 1 with two teams hot on the Eagles’ tail for the top spot. Linden (N.J.) leads the newcomers at No. 22 after two big wins last week with Iowa City West of Iowa cracking the FAB 50 in the final spot in the new rankings.

There are only four new teams in the GrassrootsHoops.net FAB 50, but for the second consecutive week there is a new No. 1 after previous No. 1 Oak Hill Academy (Mouth of Wilson, Va.) went down at the Penny Hardaway HoopFest. The new No. 1 is a familiar team to coaches, players and fans who follow the rankings. Among the four newcomers, Montrose Christian (Rockville, Md.) is the highest ranked at No. 44. 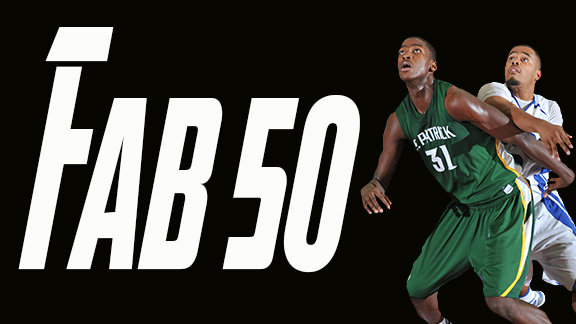 Montverde Academy of Florida remains in the top spot in the first GrassrootsHoops.net FAB 50 rankings of the 2014-15 regular season. Oak Hill Academy of Virginia and Findlay Prep of Nevada hold their spots at No. 2 and No. 3 respectively, which the change beginning at No. 4. There are ten newcomers to the rankings with the highest being No. 23 Atascocita (Humble, Texas).

The Grassroots Hoops FAB 50 release was completed on Tuesday evening, and already there is some player movement with ranked teams. No. 3 Findlay Prep (Henderson, Nev.) adds talented 2017 prospect. No. 43 Chino Hills (Calif.) will add talented transfer after 30-day sit out period.

We go 20 deep from five separate regions of the nation in our final Student Sports Regional Rankings. We rank 100 teams and nobody across the country ranks as many teams as StudentSportsBasketball.com. Final No. 1 teams are Oak Hill Academy (East), Montverde Academy (Southeast), Indianapolis Arsenal Tech (Midwest), Galena North Shore (Southwest) and Santa Ana Mater Dei (West).