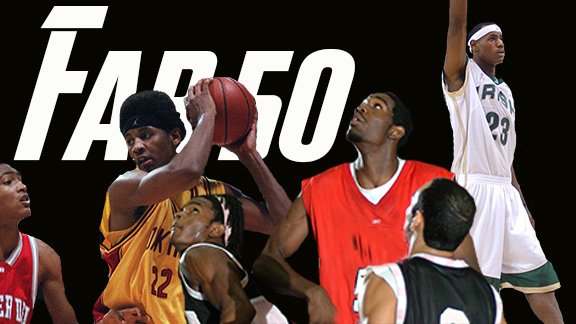 Five new teams crack this week’s GrassrootsHoops.net FAB 50, including fast-rising Garfield (Seattle, Wash.), which won the Washington Class 3A state title over previously ranked Rainier Beach (Seattle, Wash.). Rainier Beach is one of those teams that could climb back in the rankings if results involving other teams break in its favor and based on which teams are invited — and do well — at Dick’s Nationals in New York to end the season.

The season is coming to a close for many states around the country and last week state champions were crowned in Georgia, Arizona, Washington, South Carolina, and Idaho.

The big news in the Peach State was in Class AAAAAA, as Wheeler (Marietta, Ga.) secured a championship with a 59-58 victory over Pebblebrook (Mableton, Ga.). With 0.5 seconds remaining, Mr. Basketball USA candidate Jaylen Brown, who is still uncommitted for college, sank two free throws to clinch the title for the Wildcats. Brown finished with 22 points as Wheeler won its sixth state title.

Wheeler remains No. 6 in the Grassroots Hoops FAB 50, as the teams ranked above it won or await the announcement of the Dick’s Nationals field on March 17. Georgia had a plethora of strong teams this season and Pebblebrook actually moves up two spots in this week’s FAB 50 to No. 46. It wasn’t just the closeness of the title game that dictated the two-spot bump, as Pebbebrook lost in controversial fashion to No. 32 Sierra Canyon (Chatsworth, Calif.) with other losses to Wheeler, No. 38 DeMatha Catholic (Hyattsville, Md.) and top-ranked Montverde Academy (Montverde, Fla.).

In Class AAA, Jonesboro (Jonesboro, Ga.) defeated Carrollton (Carrollton, Ga.) 55-50 to end its season with only one loss, a 92-72 setback to top-ranked Montverde Academy. Jonesboro’s final ranking will ultimately be decided by the results of Dicks Nationals. For teams that played national competition, their ranking is not determined until all games around the country are completed, which this season will be April 4.

One team whose final ranking won’t fluctuate much is No. 14 Corona del Sol (Tempe, Ariz.). The Aztecs move up one spot after routing Desert Vista (Phoenix, Ariz.) last Monday 57-32 to capture its fourth consecutive AIA Division I state crown. Six-foot-10 freshman Marvin Bagley III had 16 points 14 rebounds and several rim-rattling dunks. With Bagley, a major contender for Grassroots Hoops National Freshman of the Year honors, and 6-foot-2 sophomore Alex Barcello set to return next season, Corona del Sol (which lost only to lower-ranked Sierra Canyon) is highly coveted by tournament directors across the country and will be highly rated in the 2015-16 preseason rankings.

Another team that will be highly-regarded next preseason with four returning starters is Atascocita (Humble, Texas). The Eagles’ dream of a UIL Class 6A state title came crashing down after a horrific second quarter during a 79-74 loss to MacArthur (Irving, Texas) in the Class 6A Region II title game. Atascocita made a valiant comeback after trailing 45-29 at halftime only to fall short against a seven-loss team.

Atascocita is the highest ranked team (No. 11) to tumble out of the FAB 50 this season, but the Eagles could climb back in depending on how MacArthur does versus No. 27 Plano West (Plano, Texas) in the Class 6A state semifinal Friday at the Alamodome in San Antonio.

Another candidate to climb back in the FAB 50 after falling out this week is previous No. 39 Rainier Beach (Seattle, Wash.), which fell to Garfield (Seattle, Wash.) 66-51 in the Class 3A state title game. Sophomore guard Jaylen Nowell netted 23 points for Garfield, which is this week’s highest ranked newcomer at No. 42. Garfield defeated Rainier Beach two out of three times this season.

Last season Rainier Beach played in Dick’s Nationals and if Garfield were to be selected as one of the eight teams in this year’s field, it could help — or hurt — Rainier Beach’s cause, as will results of games involving teams ranked behind Garfield in the FAB 50 in addition to clubs still playing for state titles that are on the bubble with Rainier Beach.