Three of the top six and four of the top 10 ranked teams in the Grassroots Hoops FAB 50 boys basketball national rankings will participate in the DICK’S Sporting Goods High School Nationals from April 2-4 in New York City. The championship game could potentially be a match up of the nation’s top two ranked teams.

The DICK’S Sporting Goods High School Nationals will take place in New York City for the second consecutive year and it contains arguably the finest field of teams ever in the event’s seven-year history.

If the seeds hold up, the championship game could decide the mythical national title. Unless national polls go by a set of criteria which we’ve never heard of or seen before, the top two seeds would be a unanimous No. 1 should one of the two win three games to capture this year’s tournament. Should another of the six entrants win, it could open the door for a small group of other highly-ranked teams to stake claim to the final No. 1 national ranking. 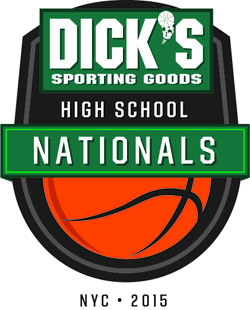 Paragon Marketing put on the event in Maryland between 2009 and 2013, when it was known as the National High School Invitational (NHSI).

Montverde Academy won last year’s tournament en route to a No. 1 finish in the 2014 FAB 50. Ditto for 2013 — Montverde Academy won the tournament and finished atop the rankings. The other team in the field to previously win the tournament is Findlay Prep, which won in 2009, 2010 and 2012. The winner of Dick’s Nationals has been crowned FAB 50 national champ three times and the lowest the winner has ever finished ranked in the FAB 50 is No. 3.

The first round matchups will take place April 2 (12 pm, 2 pm, 4 pm, 6 pm ET, ESPNU) and the semifinals will take place on April 3 (3 pm, 5 pm, ESPN2) with all six of those games played at Christ the King High School (Middle Village, N.Y.). The boys and girls championship games will take place at Madison Square Garden on April 4 and the boys game will be televised by ESPN (12 pm ET).

Montverde Academy, although it is the No. 2 seed, has to be looked at as the favorite because of its recent history at the event — and because it has the best player in the country on its team. Ben Simmons, the multi-dimensional 6-foot-9 forward, has helped Montverde Academy win the last two tournaments and the value of that experience cannot be underestimated. To put it into perspective, Ohio State’s De’Angelo Russell is considered one of the best players in college basketball this season and he was Montverde Academy’s second best player last year. That should give one an idea of Simmons’ impact on high level, high school games.

Greensboro Day, the NCISAA 3A champions, drew an extremely tough draw in opening with Montverde Academy. The Bengals had an excellent season defeating FAB 50 No. 11 Wesleyan Christian Academy two of out three times with its only other loss coming against a Davidson Day (Davidson, N.C.) team it beat handily in the return game. With its balanced talent and veteran coaching, perhaps it should be looked at as Montverde Academy drawing the tough assignment.

Huntington-St. Joseph Prep is not eligible for the FAB 50 because the program is not formally recognized by a state governing body for athletics, but it’s a talented team that’s been knocking on the Dick’s Nationals door for the last four years. The Irish finally broke through last season and won a game and we wouldn’t be surprised if they made it to the semifinals again under first-year coach Arkell Bruce.

Wheeler is talented, led by Mr. Basketball USA candidate Jaylen Brown, and is the first school from Georgia (GHSA) to participate in the event. On the way to a Class AAAAAA title, the Wildcats handed Montverde Academy its only loss of the season, so they’ll be a threat to do damage in this tournament. On the other hand, they also lost to unranked West Linn (West Linn, Ore.) and couldn’t close out No. 5 Bishop O’Dowd (Oakland, Calif.), so Wheeler will need a good start and execute down the stretch against Huntington Prep. Last year, there was alot of excitement for Rainier Beach (Seattle, Wash.) to play and that team did not perform well. Wheeler has to be careful not to be over emotional about being the sentimental favorites.

New York PSAL champ Wing’s Academy has played some tough competition, but will be on this type of stage for the first time ever against Oak Hill Academy, which has appeared in all but one Dick’s Nationals. Wing’s Academy doesn’t have Oak Hill’s experience playing on national television, but it will have the home crowd behind it and has a force to deal with down low in Georgetown bound center Jesse Govan. Wing’s Academy will also have significantly less time off the court than Oak Hill, but it will be surprising if the Warriors don’t make the semifinals. That’s where the pressure will mount for coach Steve Smith’s club. Despite all its national success, Oak Hill has yet to win this tournament, finishing as runner-ups in 2009, 2011 and last season.

The most successful team in Dick’s Nationals history, Findlay Prep, has played in the event every year since its inception in 2009. The Pilots, however, have only won the event under former head coach Michael Peck (2009, 2010, 2012) and are on their fourth coach in four seasons. First-year man Andy Johnson has a team talented enough to win the event. The Pilots, however, had an up-and-down regular season and must be on their A-Game to get past FHSAA Class 7A state champ Ely.

Ely coach Melvin Randall doesn’t have nationally-ranked players on his roster, but its a cohesive unit that became the first Broward County public school to win a state title with an unbeaten record. Ely did hand No. 15 and Class 5A champ Cardinal Gibbons (Fort Lauderdale, Fla.) its lone defeat, so there is no doubting Ely can play at a level high enough to defeat Findlay Prep. In 2011, Dwyer (Palm Beach Gardens, Fla.) shocked the Pilots in an opening round game, but this Findlay Prep team will be more prepared in terms of its player personnel and not taking its foe lightly. Coach Johnson knows his team is in store for a tough game.